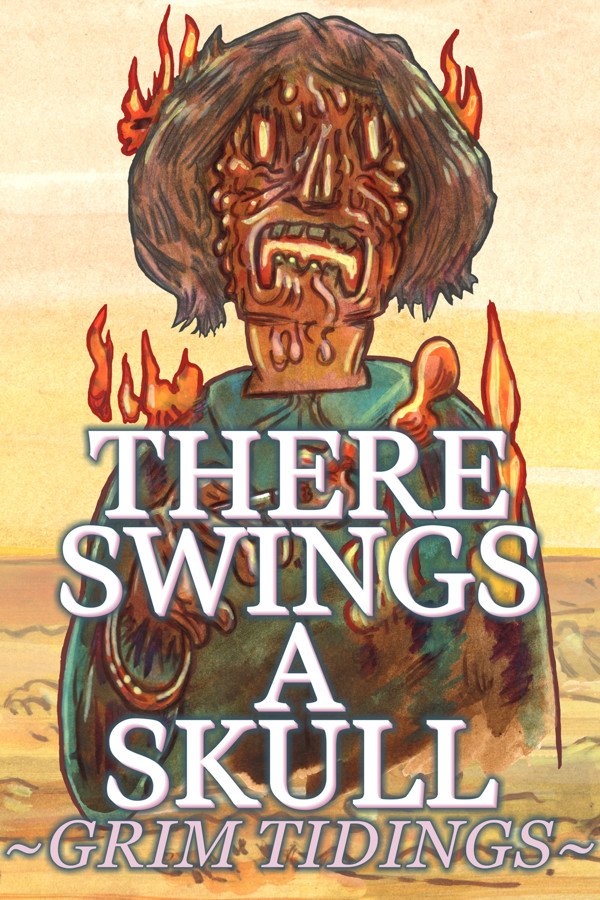 There Swings a Skull: Grim Tidings

THERE SWINGS A SKULL

The town of Pareildas stands in the center of a vast desert. Its citizens live their lives quietly. Or, at least, they once did.

In recent days the speaker-gallows sprang, weedlike, in the heart of the town - and since its inception the denizens of Pareildas have been sacrificed, one by one. The electric words that spew from the gallows claim this is to staunch the blistering hatred of the vengeful sun... but the heat has only grown more and more unbearable.

Anatoli works for the town train station. He dreams of leaving Pareildas, so that he might peacefully live out the rest of his life with his husband. His dreams share much in common with the blackened husks of the town's denizens that line the streets.

Pyotr is an independent artist. He hopes, deeply, that he might do something to stop the hellfire slowly consuming Pareildas. But the price of stopping the natural order is immensely steep - and, of course, there's no guarantee this is a natural occurrence at all...

There Swings a Skull: Grim Tidings is a narrative-horror game built in RPG Maker 2003 by Conor Walsh and Quinn K., with music by Leaf Let. Though the game initially released as a jam game it was so well-received - and sat so well with our team - that we decided to build it out into a full game.

Conor Walsh is a professional narrative designer who has written on such titles as The Outer Worlds, A Place, Forbidden, The DreadX Collection 2, and many others.

Quinn K. brought indie darling OFF to the English-speaking world and recently released the stylish and moody AN OUTCRY.

We hope you enjoy our work.