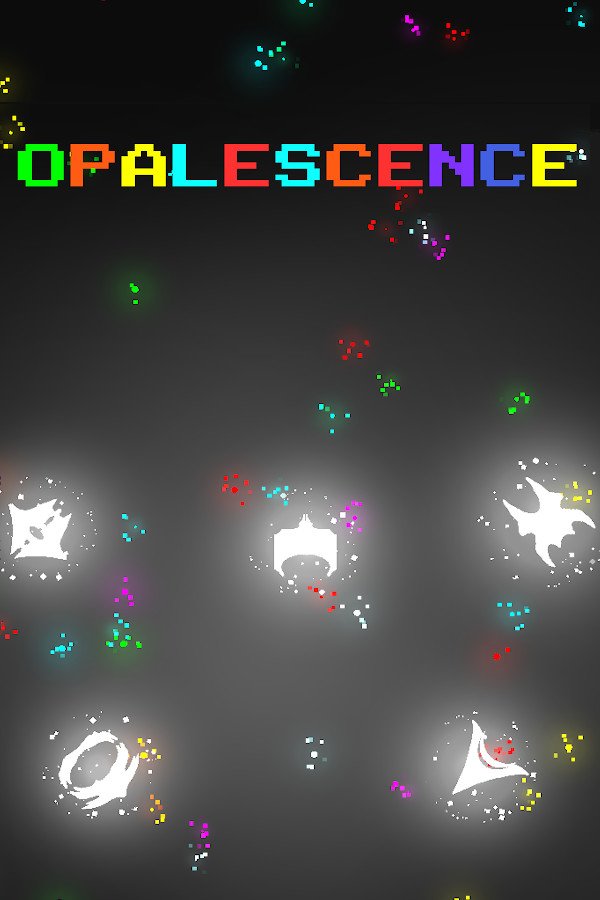 Opalescence is a colorful arcade-style top-down shooter in which you collect points and fight and avoid enemies to get a high score.

A chromatic effect, commonly found in opal, in which colors reflected off an object depend on viewing angle
Opalescence is a colorful bullet-hell in which you collect points, fight enemies, and dodge to get a high score.

Though it can change in some missions, the goal of the game is usually quite simple; Collect Points, And Survive.
Points are the colorful small pellets that appear around the map. Getting a point changes your color and keeps your light from fading.

In this game mode, you will learn the basics of the game though a series of a few short missions.

In Standard, you try to consistently beat your best score with in the using the game's standard rule set. The challenge gets harder as you go. But with your laser, your cannon, and power-ups, you can probably survive... for a while. Get the highest score you can!

Much like the tutorial mode, in Missions, you have specific tasks to complete. This time, they will require much more quick-thinking, dexterity, and reaction time. Finish each mission with as many points as possible or in the shortest amount of time to get that high score!

You pick and choose modifications to the standard rule-set to make the game harder (or easier). By making the game harder, you can increase how many points you can earn. How many lives you start with, how quickly your light fades, and how fast you move are all up to you in this mode!

The Chaser is the most common enemy type. They are the black triangles which follow you. If they touch you, you will explode. They come in different sizes, the smaller they are, the faster, but they will also have less health. Chasers have a pretty low amount of health, but if several corner you, things can get dicey. If you make a Chasers collide with another enemy type, they will damage and potentially kill it. Given their low health, making to Chasers collide almost always kills both of them

The Shooter is the second most common enemy. They are diamond-shaped stationary enemies. Instead of moving, they launch missiles at you. The missiles just move in a straight line so they are pretty easy to dodge on their own. Just like chasers, missiles will damage other enemies they collide with.

The Eater looks like an eight-sided star largest of all enemy-types. Eaters are resilient enemies, having the highest health. On top of that, they are immune to the canon. Only lasers and bombs will kill them. Eaters aren't stationary like the Shooters, but also don't follow you like the Chasers, instead, they always move toward the closest point until they touch and destroy it. They repeat this until they are destroyed

Both controller, and keyboard and mouse are supported.

In all but a few missions and tutorials, large (mostly) colorful capsules will appear. These are called Power-Ups. They come in quite a few different flavors, and can be distinguished by their color and most have a icon on them. You collect them as you do points, (simply running into them). When you do collect a Power-up you will be granted a certain ability or have one of your stats changed in a positive way. Each power-up changes you in a unique way, and their effects are as follows:


Power-Up Name; Effect
Barrage; Makes you shoot your canon much faster, unleashing a barrage of pellets on your enemies
Bombastic; Gives infinite bombs for a short period of time
Bullet Time; Slows down time itself, but slows the player down less than everything else
Gravity Well; Expands the gravity of the player, making it so that points and power-ups will be attracted from a much larger distance
Incendiary; Makes the players canon shoot much larger, faster and more damaging pellets. Incendiary pellets can damage Eaters
Max Bomb; Gives the player back all three bombs, and drops a giant bomb
One Up; Gives the player a single extra life
Opalescence; Makes you rapidly shift colors and become invincible. If you run into an enemy while Opalescent, all enemies will be destroyed
Over Shield; Places an shield around the player. If you have the Over Shield, anything that would normally cause you to lose a life would instead simply break the shield
Unmaker; Automatically charges and shoots a much more powerful and long-lasting version of your laser
Vision; Greatly expands the light cast by the player, allowing you to the enemies in the majority of the world