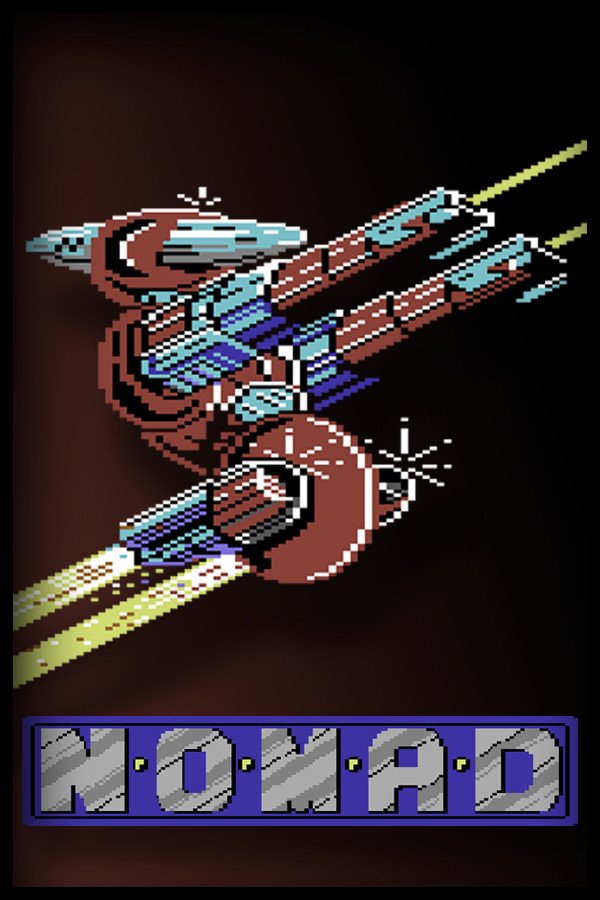 Originally released in 1985 by Ocean Software, N.O.M.A.D. pushed the boundaries of what the 8-bit computers of the day could achieve with both their graphics and their gameplay. This remastered version by Purple Viking is faithful to the original, offering retro fans and casual gamers alike a chance to experience the same thrill as the first generation of players had back in the day. This modern version also includes a new inertia-based system which can be selected in the settings menu. Good luck N.O.M.A.D. 471 (Nemesis Organisation Mobile Attack Droid)!!

According to the original instructions:

Out in the vastness of space lies the heart of an Intergalactic Criminal Network, TALOS, a man-made asteroid slowly spinning through the void, spreading its evil through the Universe. At the head of this seemingly unstoppable force sits one man, the unspeakably vile Cyrus T. Gross.

A name spoken only in whispered voices, Gross is the embodiment of all that is criminal. Avoiding any attempt to curtail his ever-spreading empire, he has crushed all opposition and seems invincible, ruling his depraved Zealots with a fist of iron and a heart of ice.

In a last-ditch attempt, the rulers of the Free Worlds have called in the Nemesis organisation, a hardened cadre of humanoid and robotic freebooters who have assigned N.O.M.A.D. 471 (Nemesis Organisation Mobile Attack Droid) to penetrate Gross’s heavily armed home-world and destroy this vile despot once and for all.

Your mission is to guide N.O.M.A.D. through the four sections of Capital City towards Gross's inner sanctum. You arrive at the spaceport and must then progress through the slums, into the city centre and penetrate the HQ; "Dun Dentin', before you reach his personal quarters for the final deadly confrontation. Many dangers await you in all sections of Capital City. In true cowardly style, Gross has installed magnotrons, heat-seeking missiles, and an infinity of equally deadly obstacles, all of which must be confronted and conquered.

Inertia - Your droid will not stop instantly if you cease acceleration but will slowly decelerate. If you apply the 'brakes' the deceleration will obviously be greater. However it is also possible to slow down by turning 180 degrees and then applying acceleration. (This is useful for shooting things that are chasing you.)

Magnetic Walls - Cyrus has placed large banks of Magnetrons along some of the city walls. When active these devices will attract N.O.M.A.D.'s metallic armour, luring him towards the guns and slowing him down.

Homing missiles - These appear from silos in the surface of the Asteroid and once targeted are difficult to lose.

Artillery - The whole Asteroid is heavily fortified and Cyrus has some of the most efficient heat guns in the known Universe. Even to be caught in the blast from one of these shells is instant death.
Robothugs - Cyrus has a whole planet dedicated to producing his personal protectors, the Robothugs. These delightful examples of the roboticist's art are programmed to make a suicide run at anything or anyone who looks as if they may be even thinking about attacking their master.

Gateways and Switches - The various sections of the Asteroid have many gateways to partition them. These can be opened and closed by brushing past the switches on the side walls. However because of the appalling maintenance droids, pushing a switch may not necessarily open the door that it should!