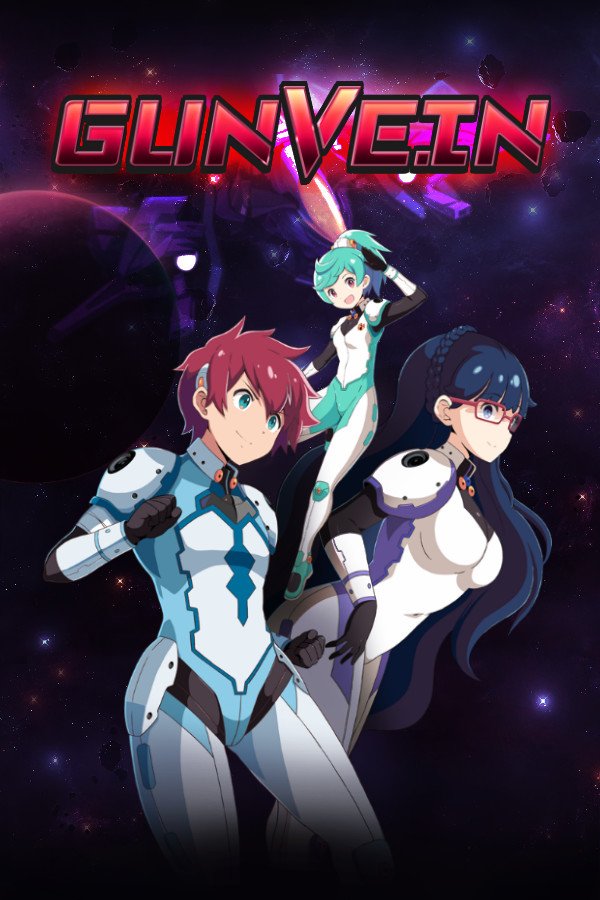 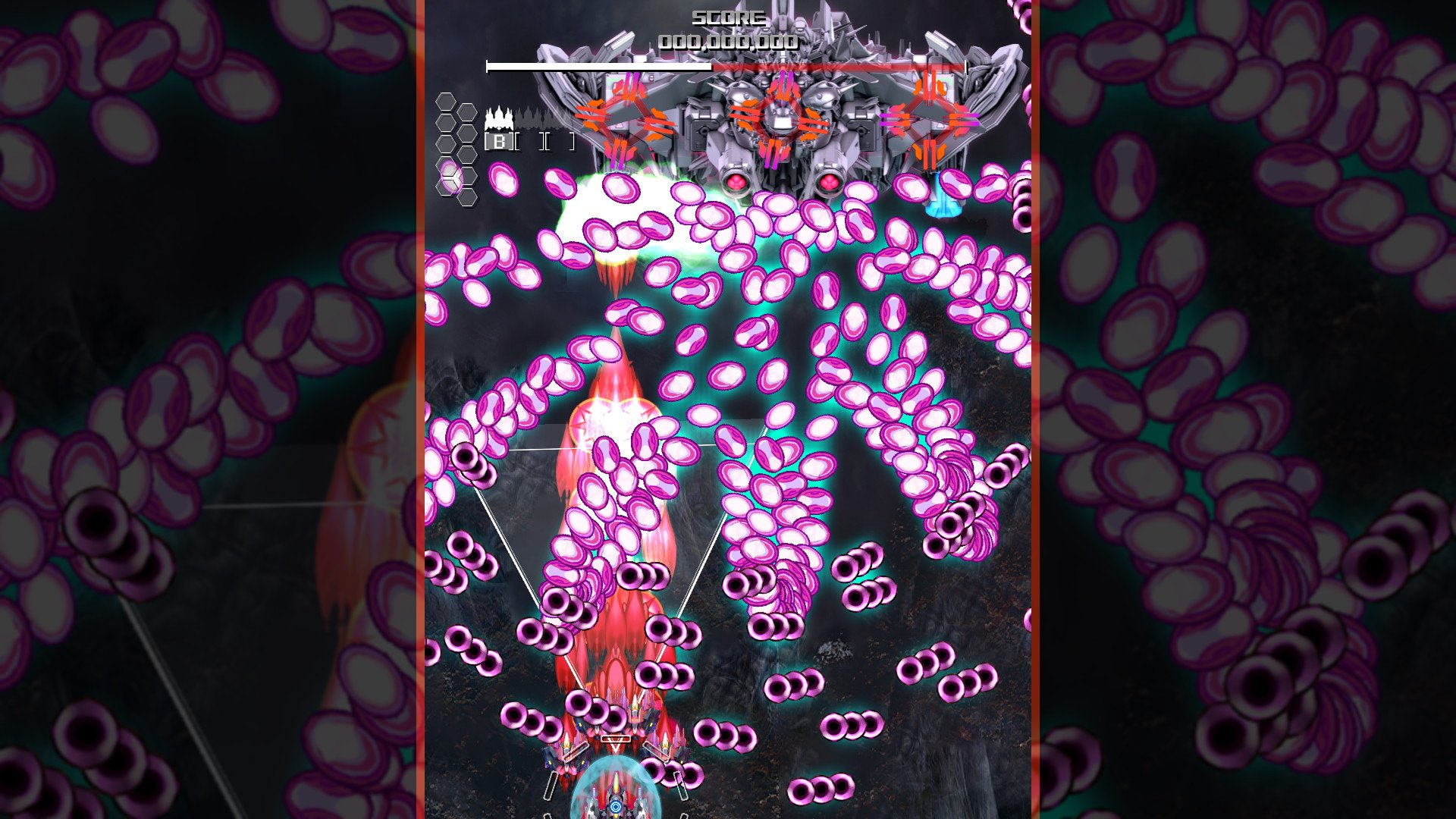 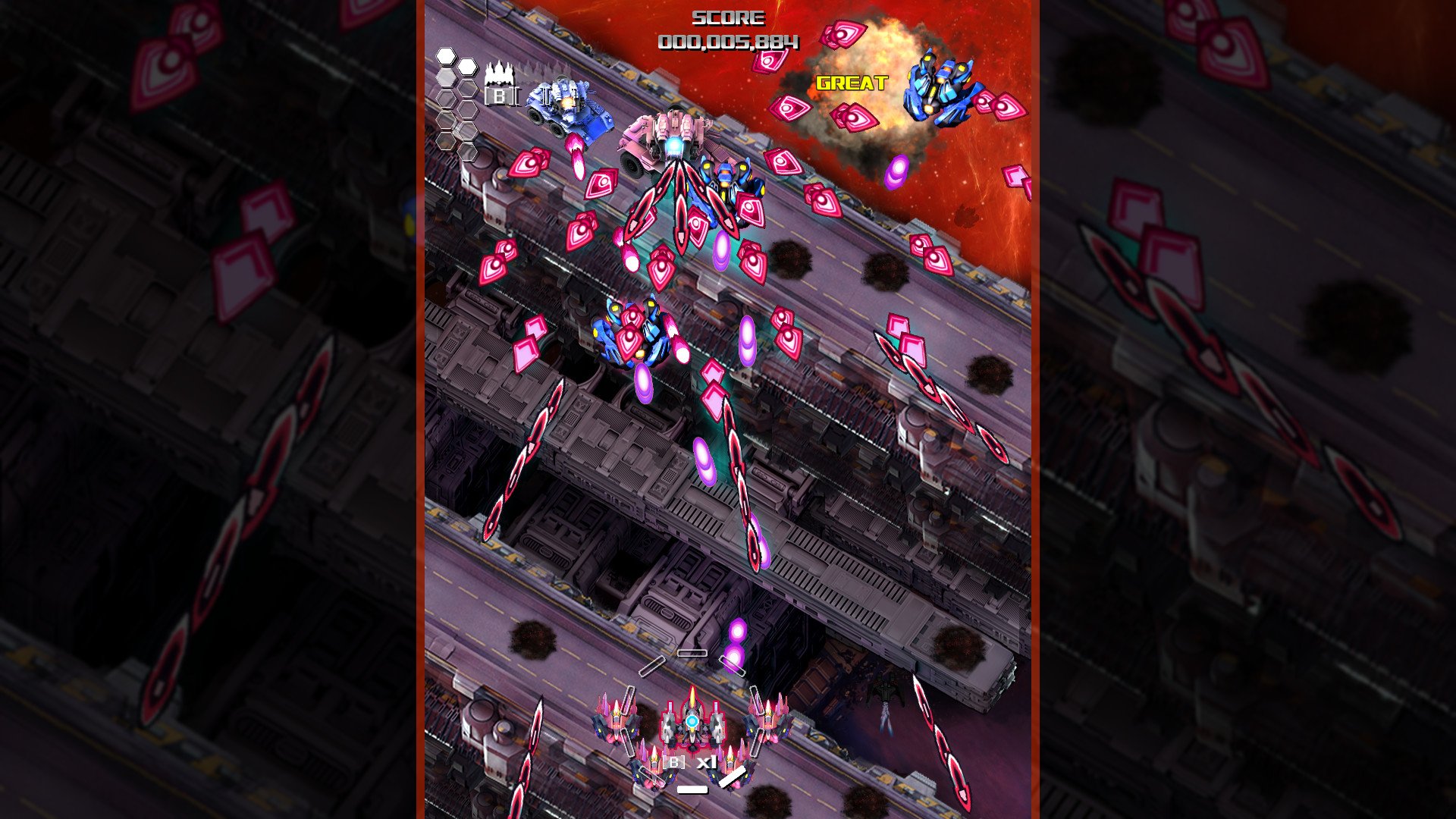 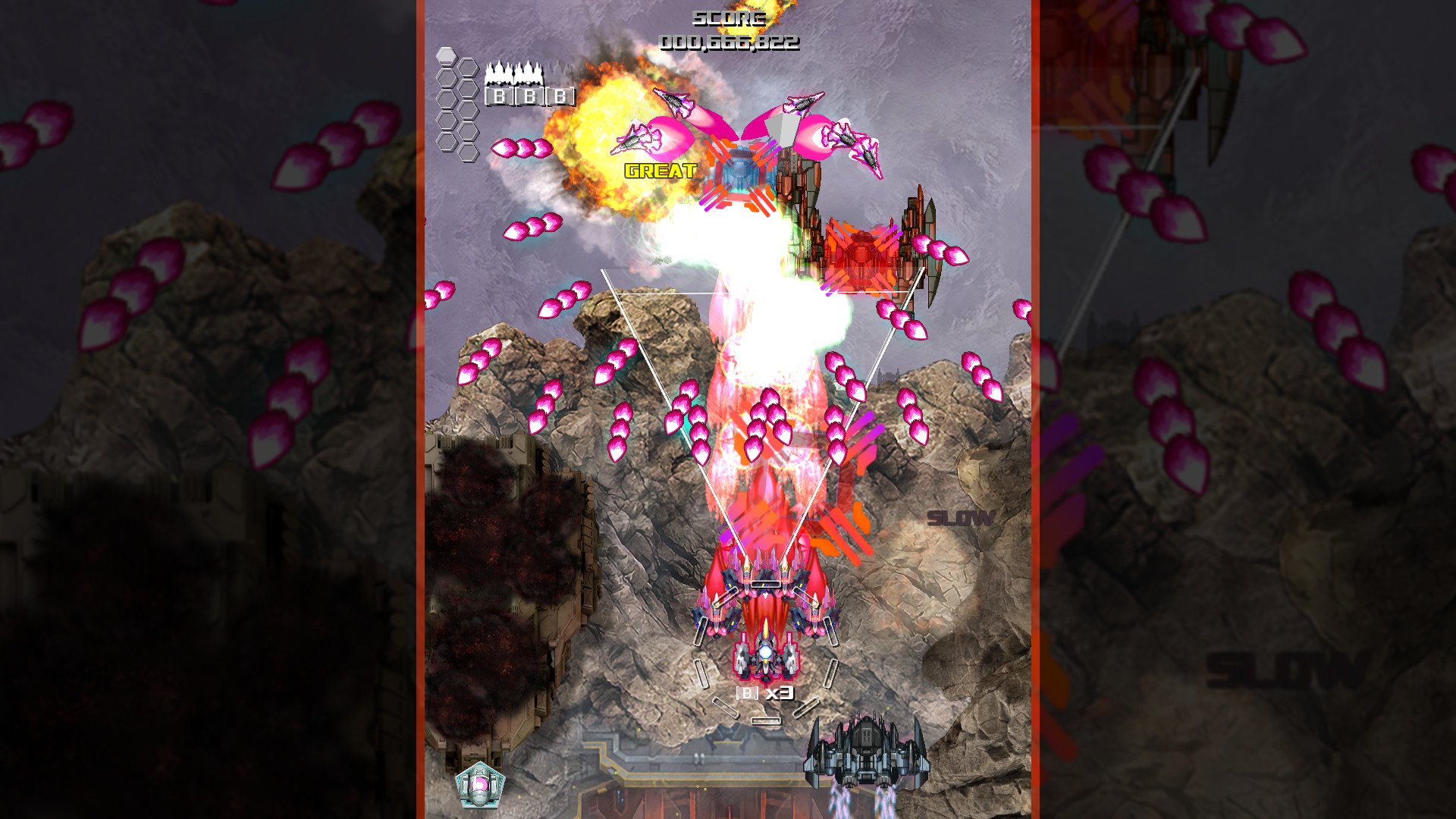 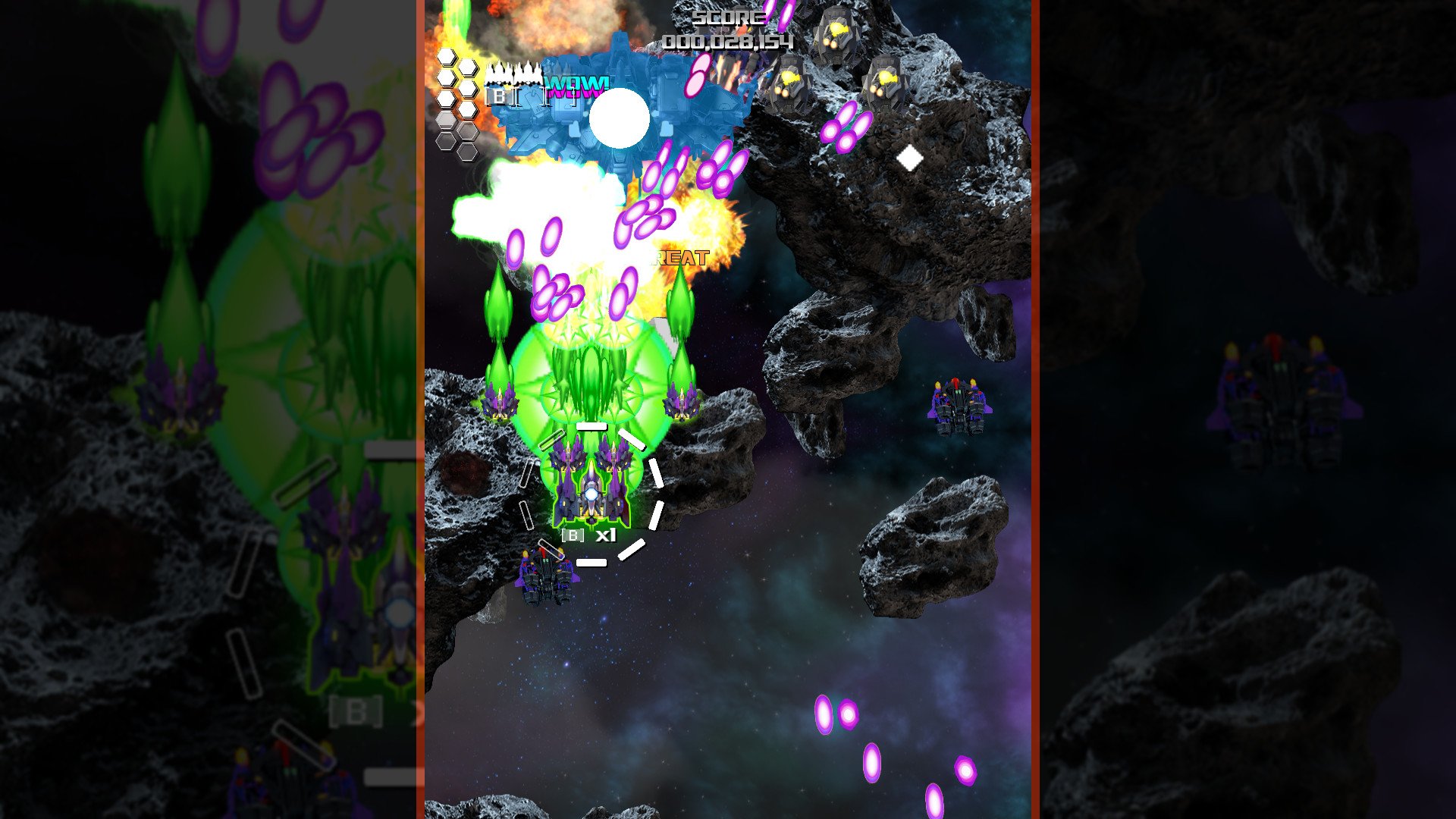 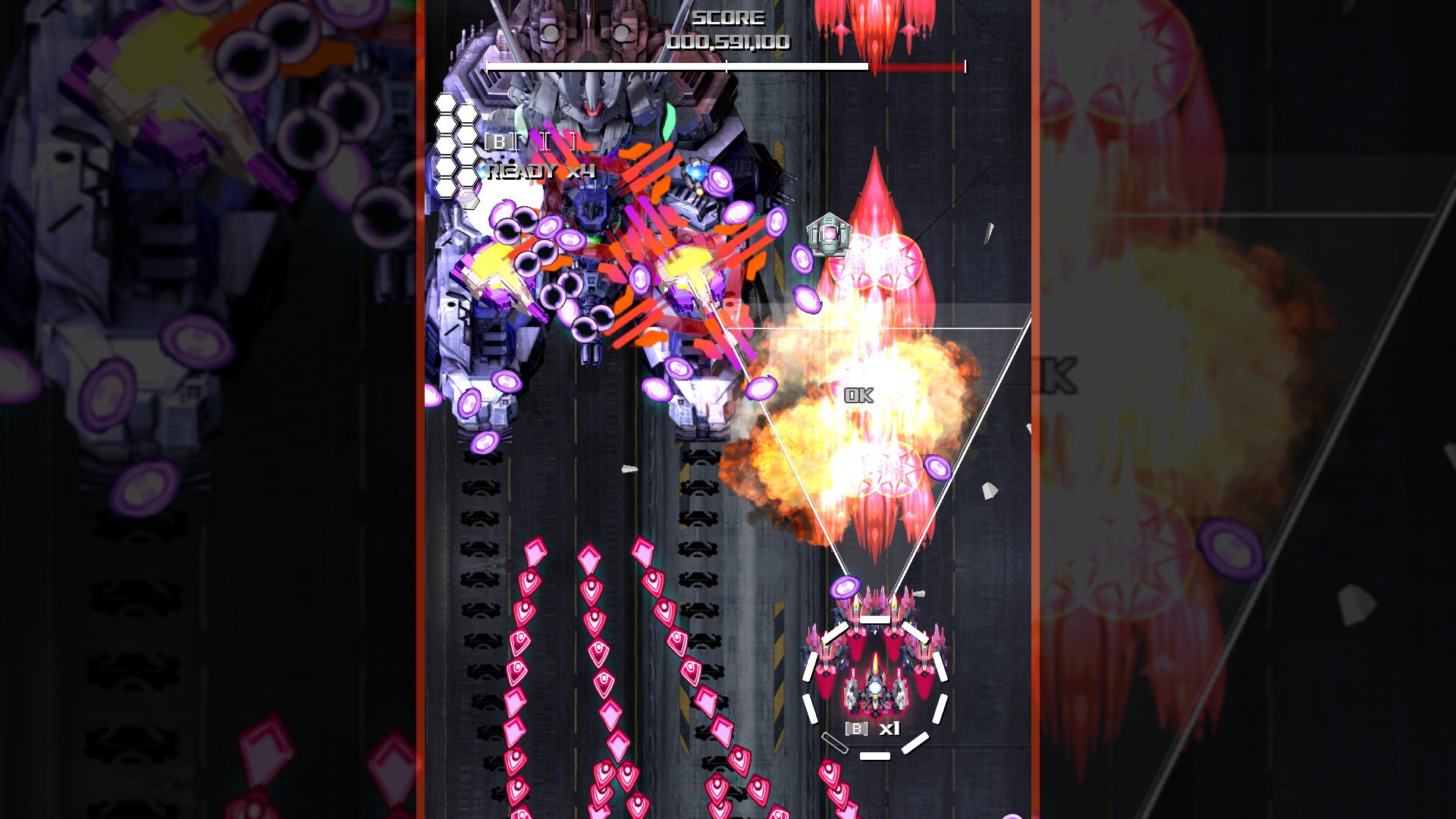 Gunvein is an intense, dynamic bullet hell STG inspired by the arcade masterpieces of CAVE, Taito and Raizing/8ing.

Screen domination is vital - use your lock ons & charged energy blasts to overwhelm enemies before they overwhelm you.

Aggressive play is rewarded with resources that can be used to temporarily power up your shot, or to unleash a devastating screen clearing Bomb. Use this to create destructive feedback loops!

Score isn't merely a number - the points you accrue come back to you as extra lives & currency for the game's shop system.

See how far you get on a single credit, save your best scores to the game's online leaderboards!

A mode which provides a satisfying level of challenge for those who don’t seek out 1 credit clears or high scores. Balanced checkpoints & a shop system which makes sure that no restart is wasted. No practice modes required, learn by playing!

Classic - has you start with a weak ship that levels up as you kill enemies. Mix & match any of the game's abilities, and upgrade your ship's stats to your liking.

Minimal - lets you play through the entire game with one of the 3 main ships and get something closer to the game's arcade mode.

•Missions
A set of extra challenges & tutorials, from thorough tutorials that will teach you the basics of the genre, to boss rushes & score attack challenges.

Gunvein has 3 main characters, each one with their own unique playstyle.

Riko uses the overwhelming speed and power of the Bagon ship to dance around shots and rhythmically destroy enemies. Has a cone lock-on which allows you to fire homing lasers, and a very powerful black hole bomb.

Damul's strength lies in its vast coverage, safety & efficiency. Enemies can be hit from anywhere on the screen, giving Miko full control over how much danger she is in. Has a full screen lock-on & a huge laser beam.

Piloting a highly experimental ship Gunex, the young prodigy relies on planning ahead & prediction to set up bomb blasts that catch enemies by surprise. Uses charged bombs & a powered up version of Bagon's homing lasers.