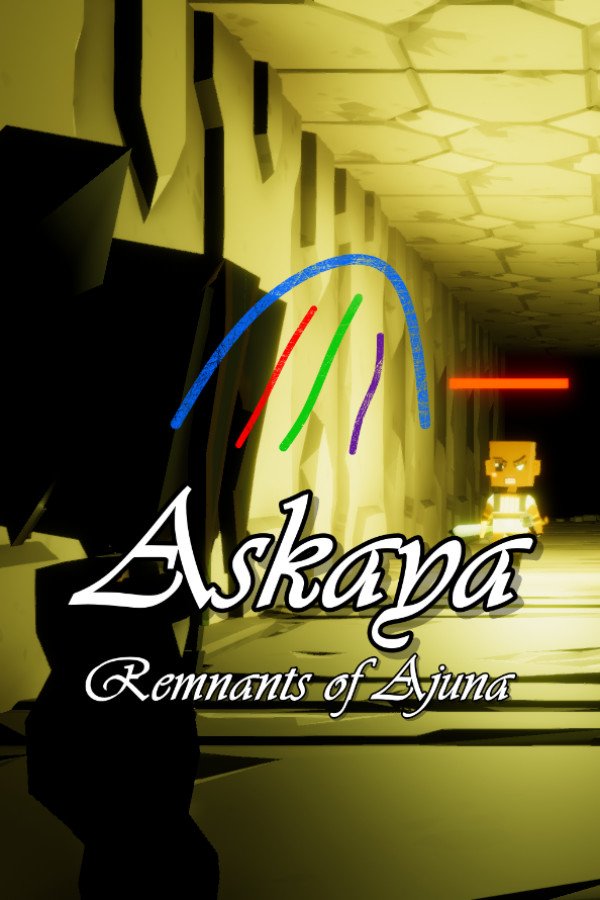 Askaya: Remnants of Ajuna is a 3rd person adventure-role playing game set on the continent of Askaya, where the sibling nations of an ancient empire stand in almost constant conflict. Players will embark on a series of adventures (called “stories”) that are generated through the roll of story dice (six sided dice that contain pictures on each side instead of numbers). These dice rolls are interpreted by an advanced AI system to generate a customized “story,” with unique settings, goals, and avenues to success.

Your Game, Your Story
Stories are generated based on the roll of the story dice by the intrepid Harbingers, a group of fortune tellers, sorcerers, and soothsayers who can peer into the future and work to shape events from their hidden village in the forests of Askaya.

The stories that are generated are based not only on the results of the rolls (the pictures on each die), but also the interpretation of the pictures. A die showing a picture of a moon could affect the time of day that the story takes place, but could also refer to a rare moonstone gem that is a key to a door in a dungeon or could represent the involvement of Maleasti, the Mother of Death, who rules the night as the elemental spirit of shadow! Virtually every story created is unique in its own way with trillions of possibilities…your stories will be YOUR stories.

RPG at Heart
Askaya is a role playing game above all else. Players will advance their character, gaining power in different weapon types (one-hand, two-hand and ranged) as well as four different schools of magic. Advancement will also come through weapon and armor upgrades, enchants, and a detailed talent tree that allows the player to customize their character to their play style.

As you use a skill, you gain power in that skill…increasing your damage with different weapon types and increasing the potency of your spells. Gain upgraded gear and learn new spells as rewards for quests and from treasures hidden in the world.

Askaya - A Land of Rich Lore
Your stories will take place in the richly developed land of Askaya, where elemental spirits control the various forms of magic and each group of people has their own heroes and villains. Your story will take place in the context of a living world full of personal politics, international intrigue and religious conflict.

How you play each story and the sides that you take will be up to you. Are you a sell-out mercenary, righteous defender or manipulative villain? It’s your story…you can be who you want to be!

Adventures Abound
Aside from playing the AI generated main stories, there are hundreds of side-quests, hidden locations to find, enemies to defeat, and treasures to recover! For early access, Askaya releases with the map of Ajuna, the heartland of the ancient empire and crossroads, and often battleground, of the three modern kingdoms that came from the fall of the Empire. Later in early access will come additional maps for the snow filled mountains of the Chishik Kingdom and arid deserts of the Tribes of Vash.

Roadmap
Askaya's early access release is only the beginning, not the end. We will continue to add new features, weapons, armor, spells, enemies, and much more. Our first major content release will feature a new map set in the deserts of the Vash tribes and is planned for released in Q3 2022.

Join us on our Discord channel for updates, media and inside information!