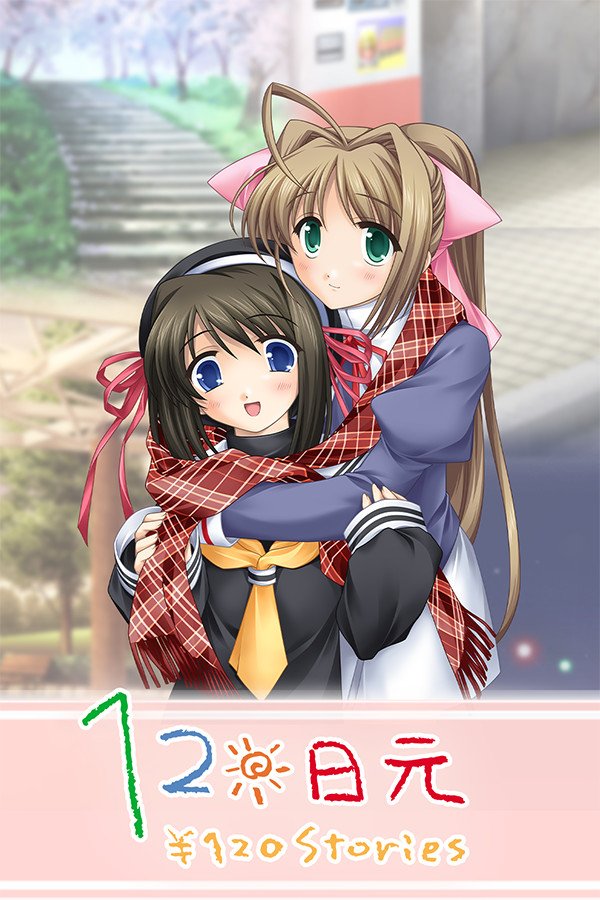 120 Yen Stories is a romantic adventure game from Nekoneko Soft, featuring a hero and heroine for each season, with the four seasons of Japan coloring the story of two people who come to know each other through their encounters with the keyword 120 yen. It is also the masterpiece of the famous scriptwriter Tomo Kataoka.

120 Yen Stories is a visual novel. As such, its gameplay has a level of interactivity and consists of scenes with static images of characters in a perspective, accompanied by occasional choices in order to advance the plot.

Winter
A freelance young man and a girl, by chance, board the same slow-moving train to the countryside.
Through this encounter with the girl, the young man evokes his long-held childhood memories...
The memories of his childhood, when he thought he could do anything, are a little bitter now...?

Summer
In a sea of people and infinite chances.
If there is a so-called "fateful encounter", it must be something special and mysterious.
This is the story of a young man and a young girl who met by chance in front of a vending machine, and the story of a summer day between them...

Autumn
By chance, I saw a fortune telling on TV: "Helping others is the key to luck".
So I went out with the expectation of finding the key to luck on my long-awaited day off.
However, when he lent a helping hand to a girl in crisis, he was met with anger...
This is a small story of two human, somewhat unbelievable...

Spring
A young man who moves to the countryside meets a young girl here by chance.
The young man, who is content with the status quo and tired of reality, and the young girl, who also has anxiety about reality, meet in the country house.
The two of them keep communicating with each other, and unknowingly, they are influenced by each other...